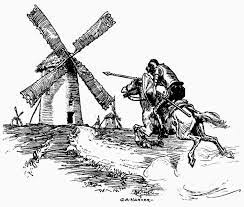 Remember Don Quixote who charged a windmill as he believed it was an evil giant?

I identify with the old gentleman. I too am a bit bewildered by the modern world: hasty but easily confused, I take umbrage swiftly when faced with blind zealots cloaked in do-good deeds.

The new windmill we all must face is an evil giant, so big, we cannot see all of it – I beg you to believe this.

You will need great courage to defeat it because it is well entrenched and has many powerful and erudite supporters who believe that they are right.

I feel like someone in Nazi Germany in the 1930’s when the politcal system was perverted and Storm troopers set the moral tone, burning books and bullying, looting, then eventually exterminating Jews, Gypsies, Communists, the insane and mentally handicapped en masse: their own people. The silent majority let it happen then – will you let it happen now?

We have a greater threat than Storm troopers facing us now. We have a culture of do-gooders, armoured in virtue so as to be apparently unassailable. They are taking our values and history and perverting them, persuading us to join the lynch mobs to do the job.

No Church nor brave politician has yet been strong enough to withstand these insidious forces who quell dissent with floods of populist rage, causing timid buraucrats to act according to the mob’s demands to suppress, notwithstanding their own codes and commitments to freedoms and fairness.

Their rationale is that all must enjoy equal freedoms in today’s society and recompense for their struggles of the past. Redress must be instantaneous on mere request. Only victims’ views and claims are considered. It is disrepectful to oppose these views.

This You Tube video on the transgender phenomenon clearly manifests one of the workings of this evil modern day windmill – it horrified and enraged me. If you are not similarly affected, go away and revel in your ostrich ways!

Teachers and doctors and administrators and politicians permit practices because they cannot stand up to unsubstantiated claims, they go with the flow. The media who trumpet the virtue signals which mask the atrocious demands are the agitators who see profit in the flames of chaos in society.

We have a moral obligation to “stay woke,” take a stand and be active; challenging threats in our communities, protecting freedoms from erosion by allegation and mob support.

If the answer is yes, make sure everyone knows that fact.

Now is the time for them to nail their colours to the mast and take sides. Post the questions on websites, ask their associations what their positions are and publish their answers, silence or evasions.

Get the answers now before they are passed into law because there is no opposition. We are fighting for our values and our children.

2 thoughts on “My new windmill”