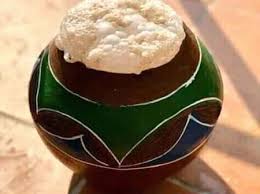 It’s a lovely word. The ‘qo‘ just rolls of the tongue onto the roof of your mouth with a soft click and the next ‘o’ comes out as ‘aw’: oohm tk awm baww tea

It is the chicken noodle soup of South Africa especially in the Eastern Cape.

It is brewed for special occasions. For young Xhosa men (abakwetha) the introduction to umqombothi is usually painful. It is brewed to celebrate their initiation to manhood, which involves isolation and circumcision. I have never drunk it.

Beer is of course a staple of most civilisations, essentially because back in the day local water supplies soon became contaminated by poor sanitation and livestocks’ lack of regard for water purity. The alcohol in beer killed most of the germs in the water and the grain was extremely nourishing. That is why most wise people like beer – they are survivors.

In Africa where my soul was born, there are a number of natural brews of which probably the most popular is mahewu because of its simplicity. It is essentially ingrained into the rural dweller’s life and is shared communally. Both these drinks are grain based and only mildly alcoholic.

However, as has no doubt been experienced recently in South Africa, where alcohol sales were banned in the Covid lockdown, people go to great lengths to make alcoholic drinks.

I can remember my father warning me never to drink home brewed shebeen beer, makanjane, as brewers often added dubious ingredients to improve the ‘kick’. Such ingredients included methylated spirits and battery acid, as well as dead rats…. Mind you there is a pervasive myth that the secret Guinness ingredient is a beef hindquarter!

The brewing of pineapple beer was part of the unofficial curriculum for most young schoolboys: pineapple peel, brown sugar and water buried in a jar for a few days!

Once when I had mumps and was in bed upstairs in our house in Mbabane, my brother Mpunzane remembered a jar he had buried and forgot about when he went off to boarding school, three months before.

When he loosened the soil above it, the jar exploded, shooting the lid into the eaves outside my room. Impressive brew!

I think that was when we got the warning from Dad.

Mpunzane, who became a beer rep for a while, tells me it is marula season in Swaziland and he has plans for for some muganu – marula beer to celebrate his 80th birthday.

Those of you who have seen elephants and baboons staggering about after eating rotting marula fruit, will know that a potent beer is possible.

If you are totally teetotal in rural Africa, your other and probably only alternative is amasi, which is yogurt before it was invented.