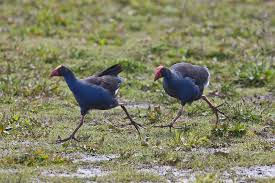 On my early morning walk with Lulu, I marked the signs of Spring even tho’ its still July. The different Mimosa blooms with soft anisescent, birdsong and aerial acrobatics. Last years’ pukekos chasing each other with high pitch squeals, much as all young children do.

I noticed that one young female (I assume) was not running as fast or squealing as desperately as usual. But as he came closer, the young male chasing seemed a bit nonplussed and not sure what to do … He chickened out, pretending he had seen a morsel and sauntering off in a different direction. To my amusement the little fugitive looked flummoxed and then indignant.

I thought how much like the human species too. How often does it happen that young females lure young males into a chase, squeaking and flapping to gain attention? It frequently achieves results.

But the stratagem carries some risk: some expenditure of reputation is made in this siren behaviour; other females may join in and lure away the intended target, others may be critical about the behaviour indulged in.

Sometimes the desired male lacks the confidence to make a final commitment, leaving a distinctly discomforted female. Sometimes the wrong males chase, which results in rejections which leaves all discomforted. Sometimes it ends in aggression and tears.

Courtship rituals are delicate and full of subtlety and nuance, which suit the female species. However, males tend to switch to overdrive at the first whiff of powder. The shy sheer away but the bold take some deterring, especially the powerful and arrogant.

Nah! I am not going to go there.

What really is bugging me is that the whole BLM palaver like the #Metoo histrionics, is digging up history to define the rectitude of their causes. Watch for new minorities appearing with a litany of historical grievances: “Participants who identified as LGBTQI+, Māori, Pacific, or having a disability were more likely to report feeling unsafe within their bubbles than other population groups,” from today’s news.

Oh dear, shall we burn a few shops and topple some statues?!

A delayed hue and cry is jumping on someone else’s bandwagon. With greater travesties and global disasters and a burgeoning population, there is not the time nor resources to re-examine historic slights and indignities only raised long after their occurrence.

It is time that the statute of limitations was reinforced, otherwise we will still be dealing with historic complaints 75 years after the fact, like a recent SS guard or executing offenders now for crimes committed last century – or is revenge a dish best eaten (very) cold?