Australian birds are numerous, many are garishly coloured; they are not very shy and when together frequently create a raucous cacophony. It seems to have  rubbed off on to a number of Aussies too!

In the early morning we are stridently informed by the blue ring-necked lovebird that there are insufficient sunflower seeds for breakfast.

No sooner is the feeder topped up than rainbow lorikiets chase him away and colonise the feeder in  a mass of scarlet, electric green, purple, orange and yellow, squawking and crooning.

A sudden intensified chattering and shrieking from the local noisy miners indicated that there might be a snake about. Sure enough – coiled on a branch above another seed feeder is our local carpet python. Still a youngster at about two metres and the thickness of a pick-handle, his brown paisley camouflage makes him nearly impossible to see. 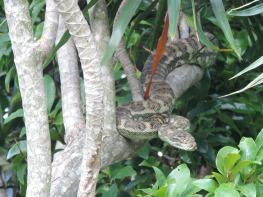 The noise attracts the attention of a family of sulphur crested cockatoos who perch in the trees about the area, grinding out their harsh shrieks.

To make matters worse this

attracted a flock of correllas, which circle above like helicopter gunships, adding further creaking shrieking.

Finally, the local crows croak by adding their indignant comment to the whole affair.

The noise is a raucous cacophony.

The snake slumbers on, unperturbed; none are brave enough to engage.

Eventually they all get bored and move off,  leaving only the Lewin’s Honeyeater which chatters on all day every day, a Spangled Drongo  and

the crested pigeons  (kuifie duifies) which are practising for Spring because the sun is out.

Later, my wife who has been trying too sleep after a night shift, is awoken by a crow and a butcher bird on the verandah,  arguing over a dazed spotted dove that had taken refuge behind a pot plant. I rescued it and had to go inside to avoid the

close attention of the persistent and clearly hungry butcher bird.

So much for the stillness of suburbia – it’s worth its weight in gold!