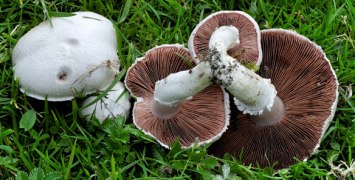 n early summer, after the first rains, Mum used to take us out to look for mushrooms.
Us being my brother Tim and Bessie our bull terrier nanny. We used to go to the Mbabane Oval, which was a grass expanse in front of the Club. Sometimes we were  looking for the foot of the rainbow to find the pot of gold… but found mushrooms instead.

All mushrooms are not the same, she taught us. The best ones are the small white mushrooms with pink-brown gills. As they grow older, their bonnets open and the gills go dark brown. Mushrooms in sauce on toast … my mouth waters even now!

But, there is a dangerous mushroom that usually grows under trees, which looks similar but has white gills. Beware, that one is deadly poisonous. So are

pink ones with white spots and the long tall ones and most of the little forest fungi.

In those days, mushrooms were mushrooms; we hadn’t heard of fancy ones like shiitake, fonterels, chanterelles and morels. I guess they would have seriously confused our clear identification of dangerous ones!

We were quite taken aback when our big brother, who was a tree enumerator (before he was a policeman), arrived back from the forests with a sackful of the ugliest toadstools one can imagine.

The Swazi name for them was makowe. With great trepidation we tried some, after we had seen him eat two plates full and not die. De-wonderfully-luscious!!

However, that really messed up our simple means of identifying edible fodder: some look like the common and garden button mushrooms but are dangerous, some look like  huge frog-kin but are delicious!

I suppose that is how we should treat people. Just because they are
different, doesn’t mean they are poisonous and some that look the same are very poisonous!

Find out before you trust a mushroom and beware of strange ones!