Banal – what an apt word! Such an apposite description 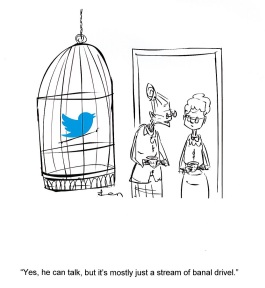 of our media in this day and age.

It is sadly neglected and under-utilised.  I feel absloutely awesome (ugh!) that I have remembered the word .

What a glorious all encompassing word!
My mother used ‘common’ quite often, which sounded and was snobbish. Despite the frequent temptation, it would not be acceptable in Australia to use such a term, as there is a perverse pride in the humble and often delinquent origins, predominantly working class and frequently criminal, expelled from or fleeing the then First World.

But back to buh narl. I must admit that it is going to make me appreciate the news so much more now that I can keep the reports in context. I can also forgive Adele for her banal apology for breaking someone’s heart – I mean if you do such a terrible thing, the word ‘apologise’ is likely to drive the poor wounded person into a manic rage! Oh I say, I must apologise: I don’t love you any more, I have found someone else – dashed awkward, what!

What a pleasing and quintessentially bon mot!