I have been riding bikes for a loong time. At age  14, when helmets were unheard of, I fell off my first bike and landed on my head causing concussion which kept me out of school for a week. .

As I get nearer 70 the involuntary dismounts are more frequent, as confidence, strength and timing dwindle. I fell off again today because I dithered about turning into a path and did so too slowly … so ooover the handlebars I went!

Earlier I had swerved around a snake which fortunately also took rapid avoiding action – a yellow faced whip snake, I think.

When I was stationed in Mtoko, Zimbabwe, I usually cycled to work on my trusty old bike, riding home for lunch. As I returned one afternoon, I met a group of men who were talking and gesticulating excitedly as I passed them

. I didn’t take much notice.  I rounded the bend, and saw a  puff adder writhing about in the dust right in front of me.

Like a jack in the box, I rolled backwards off the bike, which fell over the snake. The men had broken its back with stones and left it. I managed to retrieve my bike and put the snake out of its misery and dispose of the body, so no-one else would have a near heart attack. Fortunately my undignified tumble and twitchy actions thereafter were
unobserved.

Some time ago, I arose at a virtuous 5 a.m. to go on my early morning ride. It was still dark at that time with only a faint glow peeping over the horison. My headlight batteries were expiring so it only emitted a glimmer.
Through the houses onto the path  down a hill to the creek, round a curve to the bridge – a wooden footbridge about 6 feet wide … to be met by a dog, which I swerved around, then its master who I missed, then his other dog who I skilfully avoided, feeling pretty … until the third dog loomed smack in front  … whump!! .. dog over the side and me over the handlebars! Fortunately dog OK and me just shaken (not stirred) – reassured to see it trot off (Staffie X) – it was a neighbour from down the street.
Getting too old for falling off bikes!! 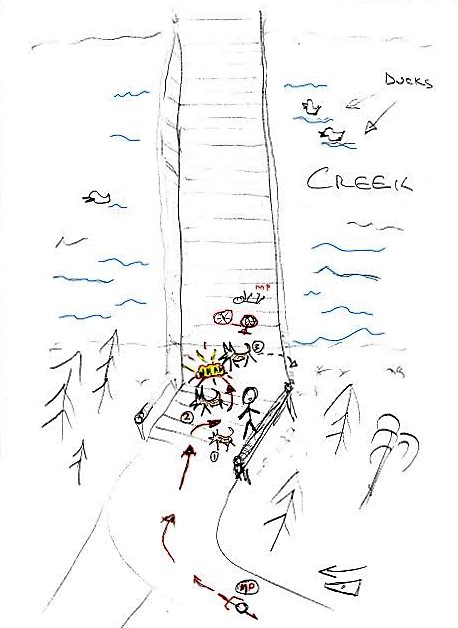 One thought on “Bike Rides in the ‘burbs”