I have once again been irked by an arrogant journalist, bemoaning the fact that the media has been denied access to a coronial report, until such time as the coroner has made findings. “After all it’s our right” he expostulated to smarmy nods from news anchors.

news bite and travel to other States when there’s no house fire, road accident or crime of sufficient horror to merit news in their own state.

They apparently have the right to pronounce on evidence before judicial officers and the right to demand statements from accused criminals, family members and supporters.

The Police do little to prevent these leeches from swarming around these stressed people, seeking some blood or tears. It was likely this ilk of journalistic parasite that hounded Princess Diana into her tragic fatal flight. They are the ones that intrude and pursue public personalities exaggerating their lifestyles and often their own opinions of themselves.

Editorial discretion and journalistic integrity have been lost in the fight for ratings and first headlines. Now anything people will pay for is media fodder: “if it bleeds it leads”!

Then there are the reality shows … scripted productions where people mimic courtship and marriage to the detriment of those once hallowed and personal treasures.

Not to mention the ‘fake news’ phenomenon which has cast doubts on the veracity and reliability of every media publication, because some spray extreme and sensationalist stories without rigourous research and scrutiny to verify them or consider the impact on society at large. Thus the total output has become contaminated and should be treated with great scepticism, which most fail to do, so they become affected by the ‘fake news’ disease.

Television especially has an exceptionally privileged position in society: they have access to nearly every household. Their output is available to all at the click of a button.

It is reasonable to expect some awareness of and responsibility for the material they broadcast.

They have the opportunity to build the appropriate culture and values which show people how to behave. Instead, they promote false and distasteful realities which many unsuspecting viewers are unable or unwilling to discern and base their dream worlds and behaviour upon.

It and the internet have replaced the traditionally revered positions in our society that judges, priests, doctors and bank managers held. These figures and their images have been lampooned and trivialised by media series.

Where are the heroes and models of good behaviour. 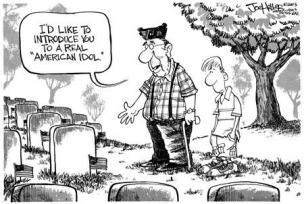 Government regulations require us to barricade swimming pools to prevent danger to children, but they don’t require barriers to television or internet to prevent access by children.

The ordinary voter is not inclined to the exercise of judicious or temperate thoughts and deeds. Just like the political and economic systems, the freedom of the press needs curtailing and review, because democracy has failed.

For years now we have been bombarded by marketing campaigns.

All of them polished and exaggerated, shined up to make you like them – the thin edge of fake news and not so fake news. Vitamins and health remedies are apparently not what they are made out to be, insurance overcharges with pitfalls in fine print, bullet blenders destroy healthy fibre, carpet
cleaners only work on some carpets…

I remember the riots and looting in London a few years ago; with speculation that the have-nots were so driven and manipulated by marketing that they quickly resorted to

theft when mayhem let them off their leashes. I thought then and think now that it is bad and immoral to dangle steak in front of hungry dogs, knowing that only the very few top dogs will be able to enjoy it.

Advertising drives acquisition into addiction – one has to have the latest iphone, music, earphones, news, cars, jeans, sneakers, piercings, tattoos, hairstyle…  All of which is unnecessary shit.

Now the fake news and alt facts confrontation testing journalistic ethics the world over is hopefully a wake-up call to society in general to shake up our values.

It is the right time for a new Testament which will show us a way through the lies and blather! St. Malachy, Archbishop of Armagh forecast in 1132 that Francis would be the last Pope! Brace yourselves non-believers… maybe Armageddon is at hand.

But wait – maybe that was an early version of fake news!

Just to juice up a current debate, let the news seeker become a news xenophobe: only trust those sources you know are reliable. And here’s the rub: how do you authenticate these reliable sources? They are not necessarily (and are very unlikely to be) those that produce stuff you like and agree with! Seek out and examine dissent and contrary views.

Get back and examine your basic values and principles and work from there. Remember distrust of new and different things is not all bad, it can be appropriate.